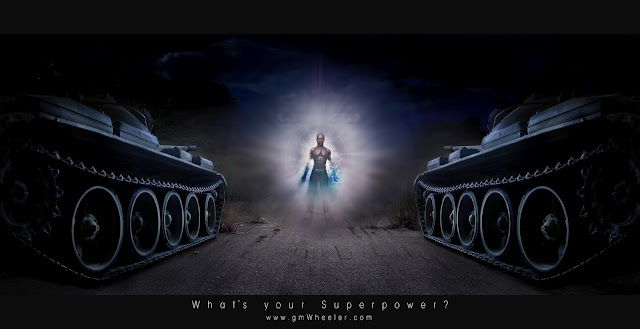 Another stroke of genius had hit gmWheeler HARD, when he came up with yet another great concept shoot, this one involved bringing Super Powers to life in a different light. This was going to be an interesting shoot, there was no doubt it was going to involve a lot of planning & hard work too! Good thing we love that, & were ready to take this challenge head on!


gmWheelers vision for this Super Power began to take shape in his vivid explanation: 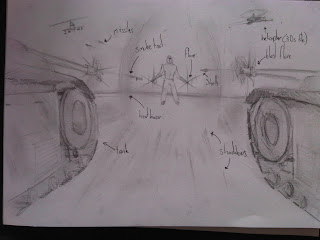 All starts with a sketch

One man ready to take on some heavy weights of the military kind, with nothing but his bare hands & immense power.
Our model here was Mr. Defria Manda. He’s look, with a touch of anger in his eye, would suit the profile Super Powered character perfectly. After some thought, planning & organising we managed to set a date for the shoot.


Up bright & early on the 10/05/2011 to start our journey, myself, gmWheeler & Defria, were geared up with excitement for the hectic days shooting activities. First stop- a War Museum to get some detailed shots of a few different military tanks that would be a crucial element to the final picture.
After sizing the tanks up for correct man-to-tank proportions, Garrick got to work on doing what he does best, capturing their essence from behind the lens.
Garrick explains his vision for the tanks & how he captures its essence in his photographs:

"I had to place the tripod on the approximate angle that the picture as a whole would be taken in, in relation to the tanks to preserve their size. Then several images were taken in different brightness's, to reveal all the details of the tank. This was NOT for an HDR ( High Dynamic Range ) Image, but rather so I could manipulate how the light falls on the tank, and the intensity of it."

Once Garrick had got what he needed for the tanks, it was time to move on to the next part: finding a location for where the great test of power would take place.

After searching around for a bit we found what we thought would be perfect! An abandoned building, that had a spacious parking lot that had been slightly overgrown with trees & weeds. We could definitely make this work, & well! Garrick got to work, using the same technique as with the tanks it wasn't long before we were happy with the results.

"Again here we used the same method as we did with the tanks, Multiple exposures to get all the detail we needed in the final product. Make sure that the shot is taken at the same height, so your tanks will look like they belong here with less Post"


Then for the final shooting phase, it was studio time...

Once again we required the skilled eyes & assistants of Mr. Leslie Thabo Modimoeng. gmWheeler Photography's studio was now alive with excitement. Everything had been set up & Defria was getting comfortable on his spot in front of the camera, it was time to get this ball rolling.

With direction from Leslies & Garrick, Defria did brilliantly! Surrounded by smoke looking like he was ready to take on an army, he managed to pull off some fierce faces, & an outstanding power stance! Defria was definitely able to feed the camera everything Garrick needed to portray his Super Power character!

"We needed shots of different types, and different lighting for the final product. Here we started with a High light, almost to simulate moonlight, and also bring out his features. In the picture to the right, a lower light was used to show rage, the picture below is done with a smoke machine, light behind and in-front of the subject. In total about 50 images of each set-up where taken so the best suited result could be used."

I had a peek at the days photo's & was impressed, I could surely see a stunning final result coming up.

With all the studio work done, a long day of shooting was finally complete. gmWheeler started piecing together the final product, this was the tricky part. Garrick lets us in a bit on how he done it:﻿

"Now the real work began, starting with a quick sketch the objects were placed in one by one. Starting with the tank on the left, each layer aligned and one by one using masks, I revealed a small portion of each layer to show only what I needed. Once this was done it was simply mirrored to make the tank on the right. The same method was used for the ground.
Approximately 20 hours of post went into this, the result is a 50mega-pixel image with many layers. In the image below we show how all the parts came together."
﻿

After having his eyes glued to the screen for quite some time gmWheller was finally happy with the final product, I present to you 'What's Your Super Power? -TANKS vs. SuperPOWER'

Look out for Part 2 of What’s Your Super Power- Walking On Clouds -How i made her fly. Posting soon!


Once again we would love to hear from you! Leave your comments in the comments section below!
Want to see more of our work? Visit www.gmwheeler.com, & for all our latest work & updates Like our facebook page- gmwheeler photography!